February is marked as the month of love, with Valentine’s Day falling right in the middle of it. It’s also the month of confusion, as it’s the only month in the Gregorian calendar that has 28 days with a leap year every 4 years. Fittingly, both traits complement each other nicely. END_OF_DOCUMENT_TOKEN_TO_BE_REPLACED

I’ve been thinking about death quite a bit while I’ve been here. More specifically, I’ve been afraid of death. It’s easy to say you’ll have the attitude of, “what a better place to die than in Hajj”—I know I used to think that way. But almost every day has been a reminder of death. There was the crane accident that happened in Mecca when we first arrived, killing about 80 people, and just 2 days ago there was a major accident at the Jamarat—the cause of which is only hearsay at this point—which ended up with reportedly 700 people dead. Then after nearly every prayer in Mecca and Medina, there has been a janaza (funeral) prayer for someone who has died. END_OF_DOCUMENT_TOKEN_TO_BE_REPLACED

A Queen. A powerful business woman. A scholar.

These titles aren’t what you would expect to hear when you hear the phrase “Muslim woman”. However, the Islamic faith is rife with examples of women who defied the conventions of their time, and were praised for it. In fact, the Prophet Muhammad (peace be upon him) told us about 4 women in history who had perfected their faith, and were guaranteed Paradise, and among them were:

If you’re a Muslim, you’ve probably heard names like Mariam, Asiyah, Khadijah, Fatima, Aishah, Bilqist. But sometimes we get wrapped up in the history of these great figures and forget to see the very human side of these great women. END_OF_DOCUMENT_TOKEN_TO_BE_REPLACED

[When] we were going to stone the jamarat, on the Day of Eid, I noticed something incredible. Many groups were carrying a flag as a way to keep [everyone] together, and to find them if someone got lost. Some groups used their country flag. Since we were still in a state of ihram, it was recommended to repeat the Talbiyah (“Labayk Allah huma labayk…”). So as we were going through the tunnels, I saw a mass of people, with the flags of their countries raised, all chanting the same praise to the same God, a praise that echoed through the tunnels and increased in volume. It was this moment where the unity of Islam really sunk into me. I can’t remember who said it, but I once heard that religion is the only thing that can unite mankind. Things like nationality, language, ideals, even the UN (for all its efforts) are all subject to our own biases and prejudices. But religion is the one thing that transcends all of those things. It is submission of our own wills, laws and desires to a higher power. END_OF_DOCUMENT_TOKEN_TO_BE_REPLACED

I wish I could tell you how long we were walking for. It felt like 2 hours.

I checked my phone occasionally, but only to see if Sheikh Tamir texted me Abu Bakr’s number. The time didn’t seem to matter much. We weaved through crowds and traffic and narrow alleys until we made it back to our hotel. My feet were sore and everything around me was hot. END_OF_DOCUMENT_TOKEN_TO_BE_REPLACED

Yesterday was the longest day of my life. It began after Fajr in Muzdalifah (about 4:00 AM), [and after that] I was crammed into a bus to get back to our camp in Mina. We had the option of walking, but it’s a good thing we didn’t walk—we had a whole day of walking ahead of us. We got back to the camp around 6:30. It was the Day of Eid which, everywhere else in the world, meant a day of celebration. For us, it [was the beginning of the Days of Tashreeq, which means] it was a day of sacrifice and hard work. Sheikh Munir said that there’s no Eid prayer for pilgrims, because the world is praying Eid prayer for you. On this day, pilgrims do 4 things:

END_OF_DOCUMENT_TOKEN_TO_BE_REPLACED

If I could summarize Muzdalifah in one word: raw. END_OF_DOCUMENT_TOKEN_TO_BE_REPLACED 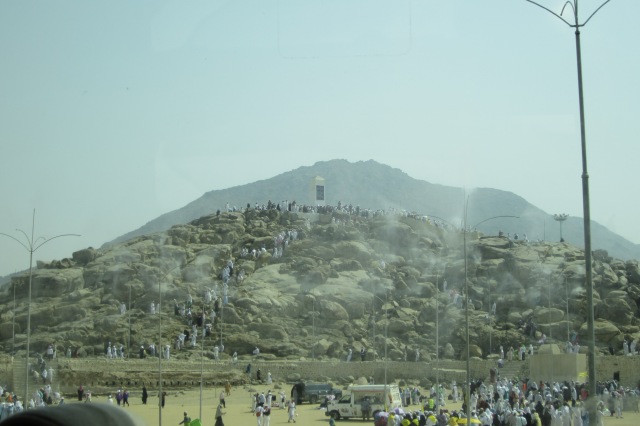 We spent the day yesterday in Arafat.

Whenever I heard of Arafat, I imagined crowds of white-garbed pilgrims standing on a red hillside, their hands raised and their eyes closed as they conferred with God. I imagined a few pop-up tents in the hilly valley with food and drink inside. But a big part of this trip has been managing expectations versus reality. Or, more accurately, imagination versus reality. END_OF_DOCUMENT_TOKEN_TO_BE_REPLACED

We’re all staying in Mina now, a city of tents that stretch as far as you can see. I continue to be impressed at how the Saudi Government has been able to handle the logistics of moving 2 million worshippers and ensuring the facilities are organized accordingly…

[H]ere at Mina, the camp is sectioned off by continent, and then broken down into streets and sections… Our tent has about 30 people in it, and is air conditioned. Today is mostly about resting up for tomorrow. We’re close to the washroom stalls—most are squat toilets, which are actually not that bad, and preferable in my ihram. The cushions are ironically more comfortable to sleep on than the beds in the Aziziya dorm. They’re pretty tightly packed though. END_OF_DOCUMENT_TOKEN_TO_BE_REPLACED

Hajj is often touted as a life changing journey. It marks the final act a Muslim must fulfil that is owed to God. Completing it by no means makes you a complete Muslim. But it does complete the 5 pillars you owe to God as a person who submits to Him.

A year ago, I was blessed with the opportunity to go for Hajj. During my time, I documented my experiences in my Hajj Journal; I’ve also spoken about it on the radio. Hajj was a journey that is impossible to fully describe. It’s an all-encompassing spiritual and physical and mental journey where each event that occurs is tailored to you, personally, by God.

What terrified me most about Hajj was the notion that it was going to change me into a different person. Change, in general, is frightening. Spiritual change is terrifying. My fear was that I would become a super-strict, ultra-hardline, everything-is-haram Muslim. I remember standing on the roof of our hotel on the eve of Hajj with both fear and excitement, wondering who I would be at the end of Hajj.

Well, it’s been a year now. And here is who I am. END_OF_DOCUMENT_TOKEN_TO_BE_REPLACED