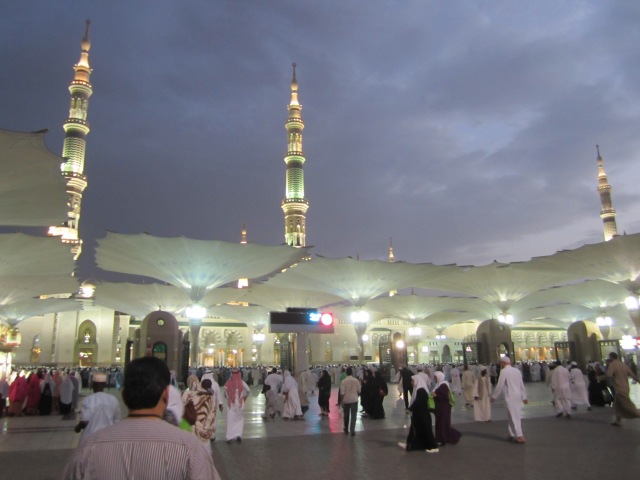 I got to pray at the Prophet’s (p) Mosque today. The first time was for maghrib (the sunset prayer), and there was no more space inside so everyone prayed in the courtyard. It is one of—if not the—most beautiful buildings I’ve ever seen. It’s sprawling canopies cover the courtyard worshippers, and the interior (from what I saw at isha (the evening prayer)) is [decorated with] intricate marble and arabesque designs. I got to pray on the rooftop—a massive white [floor] with domes and giant minarets that unabashedly sound the call to prayer and prayer itself. Then, as we started to pray, something beautiful happened: it rained. I prayed on the roof of the Prophet’s mosque in the rain, and the moment was truly a gift [from] God.

There are moments in life that strike you with such amazement that it feels like a physical force hitting you. For me, seeing the Prophet’s Mosque for the first time was one of those moments.

Our hotel in Medina was just down the street and around the corner from the mosque. We arrived at the hotel in late afternoon, checked in, and got our rooms and luggage sorted out. By the time we finished everything, it was time to pray maghrib. Sheikh Tamir led me out of the hotel and guided me to the mosque. I remember turning the corner and just being struck with awe at the sight of the massive courtyard with its umbrellas and white floors and, in the distance, the entrance to the mosque itself. It was so massive I almost couldn’t comprehend it. I wasn’t able to go inside the mosque to pray, since it was full, and so Sheikh Tamir and I joined the worshippers in the courtyard. During prayer, I had to keep myself from having my eyes wander and stare at the sights around me.

I also remember being in awe of the prayer booming without reserve out in the open, echoing off the buildings behind us. In Canada, prayer out in the open is quiet, sometimes secretive thing. But here, the call to prayer was amplified by the speakers placed all around the courtyard, and reciting the Quran was done without any reservation.

When it came time to pray isha, I returned to the mosque alone. This time I was able to go inside. Since it was getting full, I saw the staircase to left and a sign reading “Roof Open”. Out of curiosity, I went up the stairs and out onto the roof, which was like a giant field of white tiled floor with domes and minarets around me. People were filling up the lines on the prayer mats, which were housed under the roofed perimeter. And then something completely unexpected: rain. Definitely the last thing I’d expect in a desert.

Whereas seeing the Prophet’s Mosque and the booming prayer was a moment of awe and majesty, praying in the rain on the roof of the mosque was a subtle, gentle moment where I felt at peace. And so when I stood for prayer, I smiled as the rain splashed against the white tiles, and left tiny cold imprints on my clothes and face. I prayed from my heart, and was thankful for this moment, this gift from God.

360 Degree Panorama of the Prophet’s Mosque